On my recent trip to Yorkshire to take part in the Thirsk Art in the Pen, I stayed nearby in the pretty medieval town of Helmsley and managed to take a lovely walkabout on a beautiful evening.

Some info about Helmsley Castle from my English Heritage guidebook:

“The castle is surrounded by spectacular banks and ditches, this great medieval castle’s impressive ruins stand beside the attractive market town of Helmsley, in the North Yorkshire Moorland National Park.

The fortress was begun around 1120 by Walter Espec, the Norman baron who also founded nearby Rievaulx Abbey and Kirkham Priory. Most of Hemsley’s surviving stonework defences were raised during the late 12th and 13th Centuries by the crusader Robert de Roos and his descendants. This medieval fortresses first and last military trial came during the Civil War. Held for King Charles, it endured a 3 month siege before being starved into submission in November 1644 by Parlimentarians under Sir Thomas Fairfax. Fairfax then dismantled the defences, but spared the mansion, subsequently the home of his daughter and her husband, the Duke of Buckingham. It was demoted to a romantic backdrop when later owners moved to nearby Duncombe Park.”

the medieval back view of Helmsley

beautiful gardens next to the castle

These photos were taken with my phone, which unfortunately isn’t brilliant at taking photos, so it looks even better than these photos!

Helmsley is not just pictureque, it was crowned Britain’s best market town high street in 2015. Plus there’s lots to do in the surrounding areas, Rievaulx and Byland Abbeys are both nearby, and can both be visited on foot from Helmsley via the Cleveland Way National Trail, approx 1.5 hour each way.

Travelling east from Helmsley its 14 miles to Thirsk and going west its 30 miles to Scarborough.

Who knew that a medieval town in Wiltshire was doubling for an 18th century Cornish village in the new Poldark series. I certainly didn’t when I stumbled across Corsham. Recently, travelling through the Cotswolds to Avebury I noticed a sign for a ‘medieval town’ and decided to stop and take a look around… I was very glad that I did. 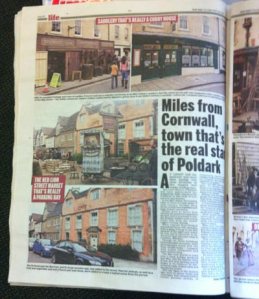 Corsham is quiet and pretty, gorgeous buildings, shops, nice old church, a stately home, ruins and most importantly a great bakery with delicious cakes and bread.

Whilst walking around, I discovered there was a ‘Poldark exhibition’ on at the Town Hall, a small display of photos from the filming of Poldark. Corsham had also featured in the newspaper, the ‘Daily Mail’ that day and there was a copy on display.

Poldark brings back happy memories for me from my childhood, as I enjoyed watching it way back in the 1970’s and its been great that we’ve now got a new Poldark series, with the gorgeous and dashing Aidan Turner playing Ross Poldark. Samantha x